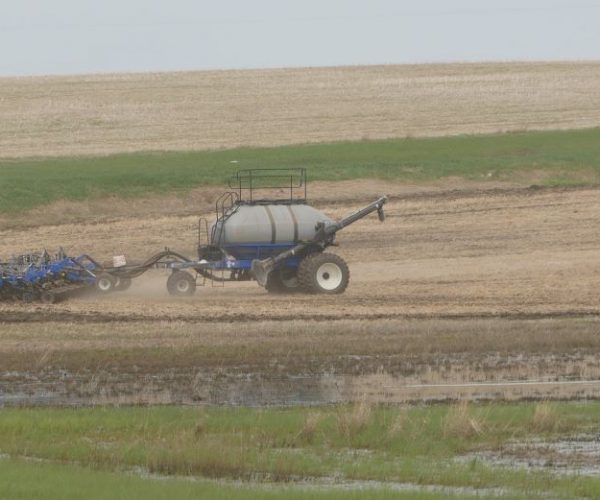 Agriculture is full of innovative examples, and improvements to farm equipment over time is no exception. Farm equipment has increased in size and functionality and improved in efficiencies. Sectional control has also evolved from manual to automatic implement shut-off options to specific section sizes. The most precise automatic sectional-control technology on the market is currently individual opener control, which allows for shutting off and/or varying the product (seed, fertilizer, etc.) being applied and raising individual openers out of the ground over previously seeded areas, according to a recently-completed two-part sectional control research study led by Alberta Pulse Growers.

Phase one of the ‘Evaluation of emission reductions and cost saving in sectional control air seeders, drills and sowing equipment across the Canadian Prairies’ project outlined the original equipment manufacturer (OEM) and aftermarket (AFT) sectional control technologies for air seeders, drills, and sowing equipment that are currently available in the Canadian Prairies, which are summarized in Table 1.

Find more details on the different technologies and the overlap effects in the final report on the Hub and on the Alberta Pulse Growers’ site.

Testing the impacts of sectional control

Three types of air seeder equipment were tested in-field in June 2020 to determine actual product overlap on both a pea and canola crop at a headland and around an obstacle:

Ground truthing of overlap measurements was conducted on three different pieces of equipment and a load cell was used to measure the draft of an implement when sections of an implement lifted at previously seeded areas. Different overlap scenarios were reviewed, and calculations were completed based on the scenarios to display potential additional costs of overlap.

In most cases the monitor indicates a substantially lower overlap amount when compared to what is actually measured in the field (see graph). So, while this displayed data is helpful, this research concluded that it may not be entirely accurate when referring to actual in-field product overlap measurements and there is still a need for ground truthing.

Katelyn Gaetz, the project lead on this study, recommended that farmers scout their fields to ground truth values, since the overlap on the monitors under-represented the actual overlap, in most cases.

This study pointed out several negative agronomic impacts that can result from overlaps, including:

Whereas the implementation of GPS guidance systems can reduce manual stress on the equipment operator and sectional control technology provides the opportunity for better field management, by selectively manage smaller sections rather than the entire implement width.

Irregular fields with more obstacles, have an increased risk of overlaps which can impact nutrient management and wetlands that make up farmland.

If fertilizer is being applied, an overlap could potentially leave excess fertilizer in specific areas.

Nitrogen losses can occur in three main ways: nitrate leaching, denitrification, and volatilization (Clark, 2014). Nitrate (NO3–) is extremely soluble, allowing it to readily leach through the soil. As the water moves both downward and laterally through the soil, the nitrate is carried with it and absorbed into the soil profile. This nutrient-enriched water can then leach from the desired area and contaminate both groundwater and above-surface waterbodies. Denitrification occurs in waterlogged soils (absent of oxygen) results in dinitrogen gas (N2) being released into the atmosphere. This process converts NO3– into N2 which then reacts with the ozone and contributes to air pollution (Bernhard, 2010). Volatilization losses are losses caused from the conversion of ammonium (NH4+) to ammonia gas (NH3). (See nitrogen cycle graphic for reference, which depicts the different forms of the nutrient, and places they may be found.)

The 4R Nutrient Stewardship concept (which specifies using the Right rate, Right source, Right time, and Right place when applying nutrients) is widely used in the industry to promote sustainable and productive farming practices. Using sectional control can help ensure the Right rate of the 4Rs can be adhered to minimize environmental risks and allows for the best use of crop nutrition.

Overlap increases when equipment navigates around obstacles, such as sloughs and wetlands. While wetlands play a significant role in ecosystem health by providing a habitat for many species, filtering chemicals, and storing soil carbon, they are generally considered ‘low production zones’ for annual crop production (producing low yields if planted).

Sometimes wetlands on field acres may be drained to create a more desirable, easy equipment path for navigation around the area. Therefore, by using more advanced agricultural equipment and technology, such as GPS and sectional control, wetland disruption can be more readily avoided and, in many cases, left intact.

When overlap is decreased on farm, there is an opportunity to realize potential cost savings, such as due to reduced inputs. Therefore, sectional control could potentially reduce total product purchased by producers, resulting in improved profitability, and reduced negative environmental impacts.

According to calculations in the Saskatchewan 2020 Crop Planning Guide (Saskatchewan Ministry of Agriculture, 2020):

These values include the average cost of seed, fertilizer, and machinery fuel and repair. Actual costs will vary depending on seed variety, fertilizer type, equipment specifics, and other factors.

Further details, results and conclusions can be found in the project final report on the Canola Research Hub and on the Alberta Pulse Growers’ site.

Olds College has Smart Farm applied research projects available on their website, including reference to the phase one and two projects summarized above.

To check out the impact variable rate can have on potentially improving crop efficiencies in another western Canadian study, see ‘Variable nitrogen fertility management of canola at the field scale, based on analysis of yield maps and spatial and statistical variability of soil test nitrogen and phosphorous‘ on the Canola Research Hub.

For research on other precision farming and variable rate topics, check out these projects hosted on the SaskCanola and Alberta Canola research databases: