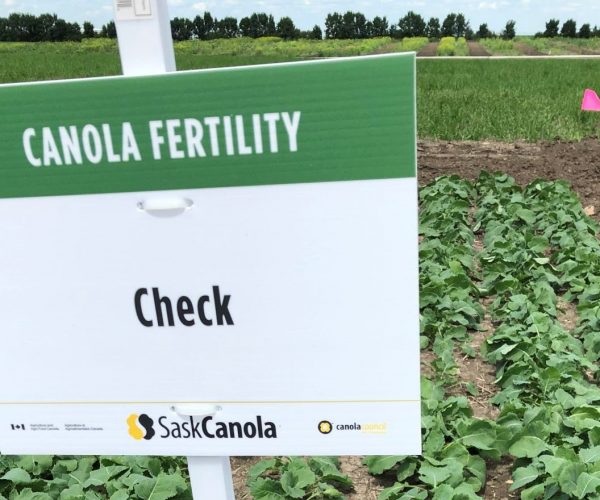 Nutrient management is a key part of planning for every growing season, and a major component of 4R nutrient stewardship. This includes considering the Right rate, Right place, Right time and Right source when making nutrient management and fertilizer application decisions for each field, each year. Although micronutrients can also be considered, the primary focus is usually on macronutrients: nitrogen (N), phosphorus (P), potassium (K) and sulphur (S). This blog examines research related to the impact of fertilizer sources and nutrient management on canola production.

Similar to other farm management decisions, complex parameters such as logistics, economics, crop rotation, and environment all factor into the final decision about which fertilizer or nutrient sources should be used. Therefore, there are many aspects for researchers to examine and test out in various soil types and locations over various years. The N, P, K and S sources selected can impact emergence and plant populations, plant biomass and seed yield, and estimated emissions. Soil testing is both important for conducting quality nutrient management research and for commercial canola production. Read on to learn about the results and conclusions from research on these topics.

Benefits ESN can have over standard urea

An earlier multi-year ‘Nitrogen dynamics’ study by Robert Blackshaw in five western Canadian sites (Scott, Melfort, Lethbridge, Lacombe and Beaverlodge) compared the impacts of polymer-coated urea (Environmentally Smart Nitrogen, ESN) with standard urea on canola grown in rotation with barley in a no-till system. Canola was seeded at 150 seeds/m2 and barley at 300 seeds/m2 with a 9” row spacing. Treatments were applied on the same plots in four consecutive years to determine cumulative effects over time. Key results related to fertilizer source and nitrous oxide (N2O) emissions were:

To learn about the impact different rates (100% or 150% of recommended levels to reach target yields) urea or polymer-coated urea (ESN) fertilizer had on canola yields, see the project summary, final report and these related publications:

To learn more about factors thought to contribute to nitrous oxide (N2O) emissions from canola residues and ground canola meal, check out Richard Farrell’s ‘Identifying the mechanisms responsible for greater-than-expected residue-induced N2O emissions from canola and flax‘ study which was completed in 2019. It suggests that proper stubble management as well as the use of inhibitors that slow the transformation of organic-N to nitrate-N (e.g., a nitrification inhibitor) may improve nitrogen use efficiency and reduce emissions.

The ‘Impact of source and placement of nitrogen and sulphur fertilizers on canola‘ project led by Ramona Mohr investigated two of the 4R components (Right source and Right placement). Field trials in 2017 were conducted on calcareous and non-calcareous soils in Manitoba. In addition to multiple placement methods, various fertilizer sources were compared: ammonium sulphate, ammonium thiosulphate, urea, potassium sulphate, urea ammonium nitrate (with and without Agrotain or ATS), and SuperU and/or urea impregnated with ammonium sulphate. A nitrogen rate of 60 kg/ha was applied to allow differentiation among the nitrogen fertilizer treatments. Results on the impact of fertilizer sources and placement included:

Learn about the impact of different fertilizer placements in this study on the project page.

Cynthia Grant led the ‘Improving nutrient management in canola and canola-based cropping systems’ research to evaluate improved practices for sulphur (S), phosphate and nitrogen management in canola. The replicated field studies were conducted at locations in each of the three Prairie Provinces, Ontario and Quebec for three years. In addition, greenhouse studies were conducted at the University of Saskatchewan. Key results related to fertilizer sources from this research were:

See the final report, on the project page for the results from these other experiments within this project:

Cynthia Grant also led the ‘Impact of traditional and enhanced efficient phosphorus fertilizers on canola emergence, yield, maturity and quality’ study from 2008 to 2010 which compared seven fertilizer source treatments (including a control with no phosphorus application) applied at four application rates on two locations in Manitoba – one with was a fine sandy loam (FSL) soil and one with a clay loam (CL) soil. Nitrogen (N) and sulphur (S) were applied before seeding to ensure an adequate nutrient supply for optimum yield, based on soil test results. Pre-plant banding was used to avoid any risk of seedling damage from the nitrogen. The results reported:

Learn about the impact of different applications rate in the final report, on the project page.

Considering alternative nitrogen fertilizer sources, John O’Donovan led the four-year ‘Legume crops to improve soil fertility for enhanced canola production’ study at seven locations (Beaverlodge, AB, Lacombe, AB, Lethbridge, AB, Scott, SK, Indian Head, SK, Swift Current, SK, and Brandon, MB). In the first year, peas, lentils, faba beans, wheat and canola were all direct seeded using zero tillage seeders with knife openers. Canola and wheat were fertilized according to the soil test recommendation and legumes did not receive fertilizer nitrogen. The effects on barley and canola yield were measured for the following three years (with malting barley was seeded into the canola stubble in 2011 and the trial seeded to canola again in 2012). The following results were shared from this project:

To learn about the impact of different fertilizer rates on canola seed year, see the final report on the project page.

For more information on nutrient management practices for growers, check out:

To investigate fertility and nutrient management research in progress, check out these projects: