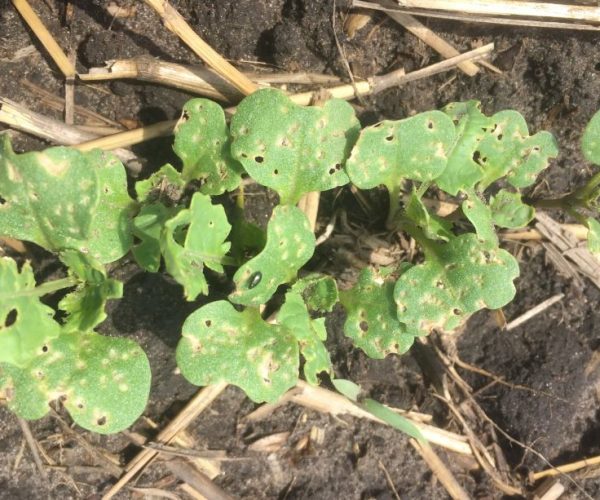 Although very small, flea beetles are a common pest insect of canola in the Prairies that can cause serious damage to crops early in the season. So, there is huge value in finding, identifying and understanding flea beetles and how they relate to your crop establishment. Research on these topics has led to an interesting progression of developments and resulted in recommendations for best managing these insects.

The crucifer flea beetle Phyllotreta cruciferae (Goeze) and striped flea beetle P. striolata (Fab.) were the two most common flea beetles in Canadian canola fields, according to Soroka’s three-year study ‘Potential flea beetles species composition shift in Prairie canola’ that began in 2009. A third species, the hop flea beetle Psylliodes punctulata Melsh., only occurred in low numbers across the Prairies. Interestingly, a shift in the range of occurrence across the Prairies was discovered from the study’s survey results. Striped flea beetles were becoming more numerous in a wider area, including the Peace River region of British Columbia/Alberta, central Alberta, central Saskatchewan, and much of Manitoba.

Since these three flea beetle species are quite small (up to three millimetres in length) and jump when disturbed, an insect scouting guide can be helpful for correct identification and scouting tips to ensure differentiation from other pest or beneficial insects, along with understanding their life cycles.

Olfert’s research concluded similar results, specifying that striped flea beetles emerge two to three weeks earlier than crucifer ones. Interestingly, both species emerge one to five days sooner in early-seeded canola than in late-seeded canola. They also emerge earlier in years with above-average temperatures, compared to those with below-average temperatures. However, flea beetle damage to canola was lower in early-seeded plots (in this study) than in late-seeded ones and the early-seeded plots ended up yielding higher.

To explain how all these findings impact flea beetle management recommendations for canola growers, listen to this podcast.

Fortunately, a subsequent project that Costamagna is leading is investigating information gaps on integrated pest management strategies to improve the efficiency of seed treatments and improve methods to control flea beetles efficiently.