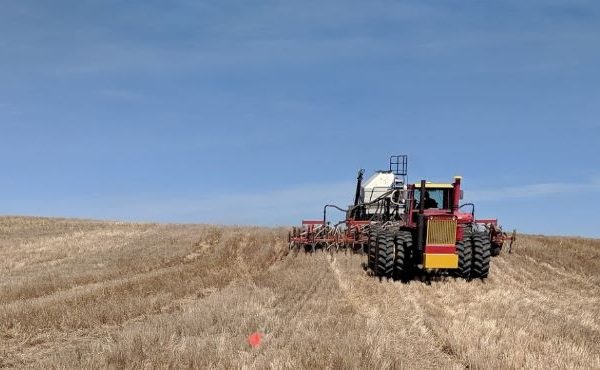 The fertilizer application goal of maximizing nutrient use efficiency by ensuring nutrients are available to the plants without causing toxicity and by minimizing losses to the environment can be challenging. But choosing application practices that use the Right placement, Right source, Right rate and Right timing (as part of the 4R Nutrient Stewardship recommendations) for each crop and for field conditions will help achieve this, while promoting both environmental sustainability and profitability for growers. It will also contribute to the Canola Council of Canada’s (CCC) goal of 90 per cent of canola acres using 4R practices by 2025.

Equipment upgrades, new technologies and the generation of more information through decades of research have aided in the improvements and evolution of application practices over the years, despite the complexity of nutrient management. Considering current nitrogen and phosphorus-containing fertilizer application options, this blog reviews relevant research related to the right placement of fertilizer for canola production systems across western Canadian conditions.

The Impact of source and placement of nitrogen and sulphur fertilizers on canola study led by Ramona Mohr was conducted in field trials in 2017 on calcareous and non-calcareous soils in Manitoba. The research compared placement methods (pre-plant broadcast, pre-plant band or dribble band after seeding) of various fertilizer sources: Results included:

Learn about the impact of different fertilizer placements in this study on the project page.

It was also noted that additional trials testing these treatments are recommended across other soil types and growing regions of the Prairies to provide valuable yield insight for canola farmers, especially for those using rates below soil-test recommendations.

Tenuta’s research abstract provided this helpful explanation about fertilizer losses, which is supported by the CCC nitrogen cycle graphic below:

Surface fertilizer applications increase the risk of nitrogen loss through NH3 volatilization, which occurs when urea hydrolysis elevates soil pH levels and increases the concentration of gaseous NH3 around the fertilizer granules. Alternatively, when fertilizer granules are deep banded (>3 inches) or buried in the soil, gaseous NH3 formed around urea granules can be interconverted to ammonium (NH4+), a non-volatile ion which subsequently absorbs to negatively charged soil particles. However, deep banding does require additional horsepower and can slow field operations at seeding time and may have undesirable effects on seedbed quality and moisture content.

Jessica Pratchler and Stewart Brandt’s Enhancing canola production with improved phosphorus fertilizer management research concluded that seed-placed phosphate is not recommended and most of the phosphorus fertilizer applied should be side-banded, especially when higher rates are needed. This was based on the following results:

In the Reducing toxicity of seed-placed phosphorus fertilizer in canola, Patrick Mooleki investigated the maximum safe rate of seed-placed phosphorus fertilizer with different opener widths and row spacing, and to develop guidelines for producers and crop advisors to use (after recognizing a frequently asked question was ‘how much P fertilizer can they apply with the seed if they are using a wider (2″, 3″ or 4″) opener?’. The following outcomes were reported:

It should also be pointed out, that the Evaluation of emission reductions and cost saving in sectional control air seeders, drills and sowing equipment across the Canadian Prairies (Phase 2) study highlights the impacts sectional control can have on various factors, such as reducing fertilizer application overlaps to avoid overapplied fertilizer which could potentially lead to undesirable effects on a crop.

To further improve the impacts of fertilizer placement in a field, growers should also consider their seed placement. In the November 2021 Canola Digest Canola Council of Canada nutrient management lead Warren Ward offers this advice, after a dry 2021 growing season, “get the drill ready to seed shallow and uniformly. Slow down if necessary to improve seed placement.”

4R Nutrient Stewardship recognizes that “the type of crop, fertilizer source, row spacing, and soil environment all affect how much fertilizer can be safely applied with seed.” But for a quick reference on recommended management practices regarding the right placement of fertilizer, see Table 1.

Table 1. 4R Practices for spring cereal, oilseed, and pulse rotations in the Canadian Prairies without manure or compost – Prairie and Boreal plains ecozones

Check out these short Canola Watch videos on fertilizer placement:

Read about what nutrient management practices are working for farmers in these Canola Digest articles:

To learn about the impacts of fertilizer rates had on canola, check out these other studies features on the Canola Research Hub: