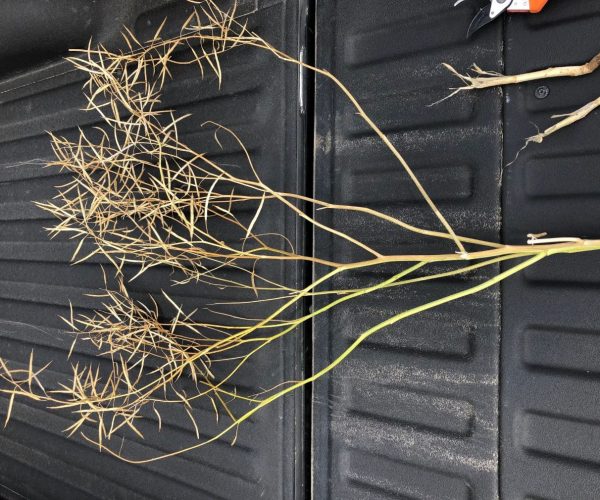 Impact of verticillium stripe on canola

Verticillium stripe has garnered more attention recently, potentially due to favourable conditions for disease development. This attention has also identified an information gap on the disease and its impact on Western Canadian canola crops. Verticillium stripe, which affects Brassica plants, has led to devastating crop losses in Europe, but we have limited information on its impact in Canada. However, new research projects are underway to enhance understanding of this disease and how best to manage this emerging pest of concern.

Learn more about the Verticillium stripe disease cycle in canola as well as identification, symptoms and management of the disease in this Canola Encyclopedia entry and this Canola Watch article.

The Canadian Food Inspection Agency (CFIA) confirmed that the observation of Verticillium longisporum in a Manitoban canola field in 2014 was the first presence of this pathogen in any Canadian field crop. The following year a survey found it in five more provinces, including the Prairies. Disease symptoms were noticed in 2018 and 2019 crop years, and this past growing season some yield losses were actually attributed to the disease.

Although the vascular disease was initially referred to as “verticillium wilt”, the name has been changed to “verticillium stripe” to more accurately describe the stem striping symptom caused by the soil-borne fungus. This symptom is often accompanied by the presence of microsclerotia and peeling back of the epidermal layer.

To better understand this disease, three research projects – which can be found on the Canola Research Hub – have been launched via the Canola Agronomic Research Program (CARP) and the Canadian Agricultural Partnership (CAP) programs.

While final results of this four-year project won’t be available until 2023, the first field trial and three greenhouse experiments have already been completed on the four-year ‘Verticillium Stripe Management’ CARP project, led by Sheau-Fang Hwang and Stephen Strelkov at the University of Alberta.

These and the future experiments/trials are aimed at:

The objectives of the ‘Verticillium disease etiology and nursery’ CAP project (which is scheduled to wrap up in 2023), led by Dilantha Fernando at the University of Manitoba, are to:

The ‘Genetics and genomics of Brassica-Verticillium interaction’ CAP project, led by Hossein Borhan at the AAFC station in Saskatoon, is focused on:

In addition, the industry is working toward finalizing a verticillium stripe disease severity scale and continues monitor the disease spread and levels of infection through provincial surveys.