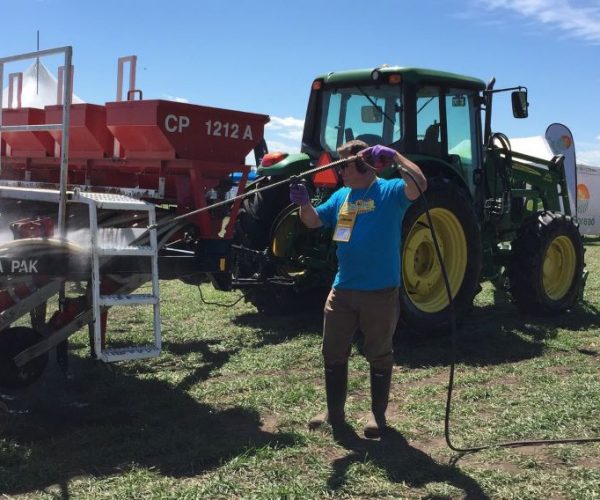 Plant disease symptoms and potential yield impacts of clubroot in canola may not be noticed until late summer or fall, but actions and management choices made in the spring can have a crucial impact on the spread of this plant disease.

Prevent the spread of resting spores

Clubroot is a soil-borne disease of Brassica plants caused by the pathogen Plasmodiophora brassicae. This pathogen has a complex lifecycle which allows it to produce and release millions of resting spores that overwinter in the soil and infect future crops. Once a field becomes infested with clubroot resting spores, they are very challenging to get rid of, so prevention is critical. This includes avoiding the spread of contaminated soil, as it can easily be carried from field to field on equipment.

Cleaning and sanitation of machinery and equipment is a recommended practice, but little was known about the relative efficiency of physical cleaning methods and the comparative efficacy of commercial chemical disinfectants. So a study led by Ron Howard evaluated a wide variety of physical and chemical methods for reducing or eliminating clubroot spore contamination from hard surfaces, in order to allow a direct comparison of their relative effectiveness.

This study found that cleaning, pressure washing and disinfection of farm and industrial equipment was effective at limiting the spread of the clubroot pathogen. The amount of soil recovered from a four-wheel drive tractor in this study (approximately 300 kg) also indicated that farm and industrial equipment has a great potential to spread soil from clubroot infested fields.

All thermal treatments of 40°C to 100°C proved effective at various minimum incubation times for each temperature. (Details on the specifics of these experiments are provided in the final report.)

Overall, the laboratory, greenhouse and commercial field trials reported that improved sanitation, including cleaning, pressure washing and disinfection of equipment, is a rapid and cost-effective strategy that can be broadly applied to manage clubroot in canola. (However, a specific cost-benefit analysis on the degree to which the strategy is employed, wasn’t covered in this work.)

Dedicated sanitation plans can enable agricultural producers, oil and gas and construction companies, and others to select practical and cost-effective methods for use in their respective situations, including those with low impacts on plants, soils and the environment.

A summary and full report on this ‘Evaluating physical and chemical methods for cleaning & disinfesting tools, machinery, equipment and other hard surfaces contaminated with clubroot’ project is available on the Canola Research Hub.

Efficacy of disinfectants on resting spores

A more recent government of Alberta sanitation study, which was summarized in a Canola Watch article, found the following:

While spring operations are the first opportunity, equipment sanitation can be practiced throughout the whole growing season, depending on the implements being used. Growing clubroot-resistant varieties and using a crop rotation with at least two years between host crops can also be effective in reducing the impact of clubroot, as determined in Sheau-Fang Hwang’s study, which also examined methods of disinfecting agricultural equipment. Supplementary clubroot management recommendations for growers and agronomists can be found at clubroot.ca, along with provincial maps of affected regions.

While sanitation can prevent the introduction or reduce the spread of clubroot spores, there are many other implications of spreading clubroot and increasing spore loads in crop production areas. Many of these topics (such as surveillance, genetic resistance and patch management) are investigated in the completed or ongoing clubroot research on the Canola Research Hub.