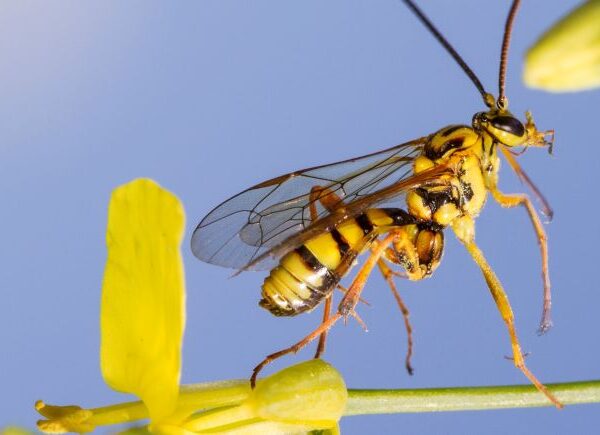 With many tasks and considerations on the go during the growing season, including scouting and counting insects in multiple spots within a field, time to observe minute details on individual insects may not be a reasonable option. So taking the opportunity outside of the growing season to familiarize yourself with a few biocontrol organisms that might be in your canola field, or could be an optional control in the coming years, will make it easier to potentially spot them next year. This blog investigates some nematodes, wasp parasitoids and other insect pest predators as biocontrol options to impact cutworm (and other insect pest) populations in your crop.

One potential biocontrol option is entomopathogenic nematodes (or EPNs). These predatory nematodes are soil-dwelling round worms that specialize in parasitizing insects, including canola pest species. Limited research has been completed on the use of EPNs to control foliar and below ground insect pests in the Canadian Prairies. So Paul Tiege and Shabeg Briar investigated the possibility of EPNs as a commercially available biocontrol agent in the Biocontrol potential of entomopathogenic nematodes (EPNs) against selected key insect pests of canola in Alberta project.

In general, mortality rates of most insects increased with increasing nematode concentrations. Specific impacts of the species varied by insect pest species.

This study provided encouraging base line laboratory information with commercially available EPN species on canola for management of multiple insect pests including diamondback moth larvae, lygus bugs cabbage root maggots and black cutworms. Exploration of locally adapted and virulent strains of EPNs pertinent to the Prairies should also be considered in the future projects. Investigating the effectiveness of selected EPN species outside laboratory environment under greenhouse and field conditions would also be interesting.

Though efficacy (mortality) of flea beetles varied among the EPN species, further exploration on applications of EPNs targeting flea beetle overwintering sites appears could be considered, with the aim of reduction in adult flea beetle populations migrating to the neighbouring fields.

The patchy distribution and subterranean habitat from which cutworms emerge at night to feed on young plants at or below the soil surface make chemical control of this insect pest challenging. Since the spring stem feeding of multiple cutworm species on several major Canadian crops can cause enough damage to warrant reseeding, additional control options, such as biological control by natural enemies required investigation.

Key findings from this research includes:

Potential of entomopathogenic fungi for biocontrol

Within this project, an additional study was completed on assessing the efficacy of entomopathogenic fungi (EPF) as biocontrol agents of cutworms. EPF are environmentally friendly pest control agents that naturally occur in the soil. Few studies have examined the potential for EPF to control cutworms, and thus there is limited documentation of EPF attacking economically important cutworms in Canada and EPFs have been underutilized as biological agents for cutworm management.

According to our 2012-2014 cutworm data in Manitoba, EPF caused greater mortality to cutworms than parasitoids. Therefore, they could be more suitable biocontrol agent than parasitic wasps in Manitoba, and possibly in other Prairie provinces.

Future research on this topic could investigate potential interactions between pre-emergence herbicides and EPF in field crops (especially to determine any impact of herbicides on the efficacy of EPF applications, since EPF would need to be applied in the early seedling stage when cutworms cause damage, which is also potentially right after fields are treated with herbicides).

In addition to achieving the objectives, Key findings from this include: