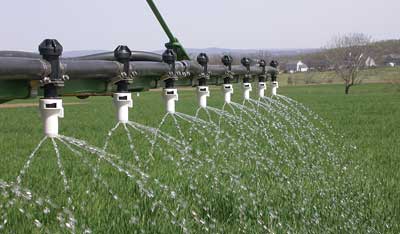 Western Canada has a short growing season. Crops in Western Canada start to take up nutrients early and uptake escalates quickly. For these reasons, the ideal timing for fertilizer application is at seeding. This saves an extra pass over the field and ensures that the expected fertilizer requirement is in place when the crop needs it. But in-season application of nitrogen or sulphur can make sense in some circumstances.

A nitrogen top dress can make financial sense for canola if:

The earlier the better, and before the 4- to 6-leaf stage of the crop. This is pre-bolting stage just before buds form and plants begin to elongate. For canola, maximum rates of nitrogen uptake occur from about the 5-leaf stage to full bloom. (See the graph.) Ideally, nitrogen should be applied before that period because rainfall is required to move the fertilizer into the root zone and make it available for uptake.

AAFC research out of Indian Head, Saskatchewan, showed that nitrogen top dress as late as 5-10% flower can still provide a yield benefit. The benefit may not be as high as an earlier application, but could still be economical. If a field is close to flowering and plants have pale lower leaves and stunted growth that could be attributed to nitrogen deficiency, then a top up may pay off. To determine the likelihood of deficiency, think about the rates put down, possible losses due to high soil moisture levels, and yield outlook for the crop. (Find more on deficiency symptoms in the Canola Encyclopedia chapter on nitrogen.) When making this assessment, consider the possibility that excess soil has stressed roots and inhibited nutrient uptake. In this case, a top up may not provide any benefit if the deficiency is due to inability to access the nutrient rather than insufficient quantities in the soil.

What nitrogen source to use

Nitrogen options for in crop application are urea (dry), UAN (liquid) or ammonium sulphate (if sulphur shortages are also expected.)

UAN, being comprised of half ammonium nitrate, is slightly less prone to losses than dry urea broadcast on the surface, but both surface applications require rain (ideally 15mm or more) soon after application to move the fertilizer into the soil and limit volatilization losses. The key for UAN is that it reach the soil surface. UAN applied in no-till situations with high trash cover can be absorbed by the residue. This fertilizer is not lost, but may not be entirely available to the current crop. Top-dressed nitrogen immobilized in high-residue fields may serve to promote mineralization cycling in lower layers of residue, so while the applied nitrogen may not be available, it helps to increase the available pool.

Ammonium sulphate is less volatile than urea and, in general, ill not lose nitrogen as quickly when surface applied. However, losses from ammonium sulphate can be higher in calcareous soils. Ammonium sulphate reacts with the calcium carbonate (CaCO3), and releases free ammonia that is subject to volatilization.

ESN is not recommended for post seeding applications because its slow-release feature may not release the nitrogen in time to produce an economical crop yield response. Plus, it works best when buried in the soil.

If using granular, apply when leaves are dry to make sure prills roll off onto the ground and don’t cause leaf burn.

If using liquid, try to apply when leaves are moist from early dew or a light rain so liquid nitrogen fertilizer runs off quickly. Applying when hot and dry can increase absorption of liquid into the plant, increasing the amount of leaf burn. Consider adding some extra water to the tank in these conditions if waiting is not an option.

NOTE: Plants hit by liquid nitrogen fertilizer will be burned and stressed. Spraying them with a herbicide right afterward can kill or set back these stressed plants. Give the crop a few days to recover before making any other applications.

How much to apply

At least 20 per cent of the target nitrogen rate is recommended. For example, if the goal is to apply 100 lb./ac. of actual nitrogen, the top dress should be at least 20 lb./ac. and probably 30-40 lb./ac. to make it meaningful. Remember, a nitrogen top up will extend canola’s vegetative period and delay maturity. Consider the calendar date and fall frost risk in addition to potential yield benefits when making a nitrogen top up decision.

Growers may need to top dress up to 30 lb./ac. of actual nitrogen to see a noticeable improvement with the naked eye, but yield differences for rates lower than that may show up at harvest.

Broadcast spreading of urea or surface dribble banding of UAN are the most common and fastest methods. Click here for more on equipment options. But these methods can also result in the highest volatilization losses if rain doesn’t come quickly. (Losses with UAN, which is half ammonium nitrate, tend to be lower than with urea.) The urease inhibitor NBPT helps to minimize these losses. Read “Factors for loss” below.

Fertilizer placement in the soil, as opposed to on the surface, greatly minimizes losses from volatilization and immobilization, and enhances overall nitrogen fertilizer recovery. This may be difficult to achieve in practice because older spoke wheel applicators are not very common. Side dressing requires much more technologically advanced equipment to band the nitrogen in the soil while the crop is growing rather than leaving it on the surface.

Tank mixing liquid nitrogen with herbicide and applying through the sprayer is not recommended for a few reasons. This method can provide only a few pounds of actual nitrogen per acre — which isn’t enough to make a difference. Leaf (foliar) applications are highly inefficient, as plants take up nutrients through their roots. (The expression “One pound through the leaf is worth 10 pounds through the soil” is not true logically. If it were, you could produce a 50-bushel canola crop on 10 pounds of N through the leaf, which is highly unlikely.) Finally, fertilizer blanket applied over the leaves through flat-fan nozzles can damage the crop.

“Spoon-feeding” Nitrogen. Using many small applications through the uptake period is routine in potatoes (it is called fertigation), but this not economically efficient for canola in Western Canada. That’s because (1) multiple applications add to the cost, (2) nitrogen applied into the soil early in the season is generally most efficient and in-place as the crop needs it, and (3) weather variability through the season add to the risk that the job won’t get done. An exception is if N losses have been high (or the crop under-fertilized). In those cases, in-crop applications may be warranted.

As Manitoba Agriculture fertility specialist John Heard says, multiple in-season fertilizer applications can work for a long-season crop like corn if you have irrigation when it is dry and tile drainage for when it is wet. “There is simply not enough opportunities to intervene in a crop like canola or cereals,” he says. He adds that in corn, in-crop applications are banded into the soil between the rows. They are not top-applied with a sprayer.

The following will influence the amount of loss for surface-applied N.

Peak sulphur uptake for canola occurs later than peak nitrogen uptake, so a sulphur top up can occur a little later than nitrogen top up. Post-emergence sulphur can be applied up to early flowering and still provide a yield benefit, however earlier is usually better if the field is deficient.

In the meantime, if an in-crop application is required to rescue yield potential for this year, growers could target only those areas — such as hill tops or areas of lighter soil texture — that tend to be sulphur deficient as long as they knew the rest of the field was OK.

A sulphur top dress can make financial sense for canola if:

The earlier the better, but sulphur can be applied up to early flowering and still provide a yield benefit. Note that response to top-dress applications will depend on receiving enough rainfall after fertilization to move the fertilizer into the root zone. If the crop cannot use all the nutrient applied as a late top dress, most of the S would be available for next year’s crop. The only loss situation would be leaching on a sandy textured soil with lots of rain and snowmelt.

What sulphur source to use

Ammonium sulphate (dry) or ammonium thiosulphate (liquid) provides sulphur that is immediately available to the crop. It also provides a nitrogen top up at the same time.

Elemental sulphur applied at the time of seeding or later will not be available in time for when the crop needs it, especially if it is incorporated. Elemental sulphur prills need time to break apart to increase the surface area, and then require bacteria to oxidize the sulphur into plant available form. While these bacteria are most active in warm moist soils, it can take months for elemental sulphur to become available to the crop.

Also note that any sulphate made available from the oxidation of elemental sulphur applied last fall may have leached down into the soil profile if fields were wet last fall and this spring, potentially delaying availability to the crop this year.

How much to apply

That depends on how much deficiency you expect. As few as 10 to 20 pounds of actual sulphur may be enough to provide an economic benefit, but higher levels may also provide a good return on investment if the soil is very deficient.

Application just prior to rainfall is best. Surface applied ammonium sulphate requires rain to move it into the root zone. Sulphur is not volatile like nitrogen fertilizer, so while dry conditions may delay availability to the crop, losses will be minimal if rain is not immediately forecast. Avoid spreading granular product when the leaves are moist from dew to limit sticking of the prills and leaf burn as a result.

If dribble banding liquid ammonium sulphate (8-0-0-9) or ammonium thiosulphate (12-0-0-26), applying when leaf surfaces are wet can allow liquid to run off and limit leaf burn. Leaf burn is expected at any stage of canola development, but any burn damage will cause less economic impact than a nutrient-deficient crop.

Applying sulphate fertilizer in a tank mix with herbicide/fungicide may not provide enough sulphur to provide a benefit to the crop. Also, flat fan sprays that cover the leaf are far more toxic to the crop than fertilizer dribbled on the soil surface. Plus, the crop can’t take up much fertilizer through the leaves.

If the crop cannot use all the sulphur applied as a late top dress, most of the S would be available for next year’s crop. The only loss situation would be leaching on a sandy textured soil with lots of rain and snowmelt.

Does adding S stabilize N against losses? If the crop also needs sulphur, adding ammonium thiosulphate to the fertilizer blend could provide some (limited) benefit as a nitrification and urease inhibitor. But if stabilization of nitrogen against losses is the true goal, use a known effective stabilizer such as Agrotain or Super U.

Phosphorus needs to be in the soil and as close to the seed as possible for maximum benefit. Canola plants continue to take up phosphorus as biomass increases, but phosphorus fertilizer tends to provide its greatest economic benefit very early in the season. As the soil warms up, phosphorus conversion in the soil increases and the crop can tap into existing phosphorus reserves. Unless the soil is very deficient in phosphorus, growers are unlikely to see an economic benefit from an in-crop application.