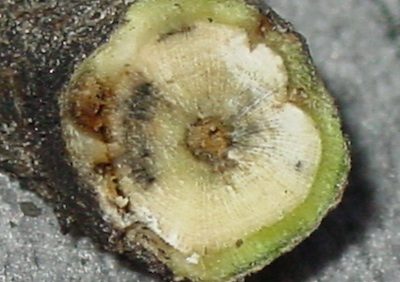 Scientific research in Western Canada has identified three factors that increase the risk of canola yield loss in short rotations. They are blackleg, clubroot and cabbage root maggot.

Short breaks between canola crops will increase the risk of selecting for more races of the blackleg pathogen that can overcome current resistance genetics. Scout for potential breakdown of blackleg resistance. Blackleg severity scores of 2 or more in an R variety is a good sign that the genetic resistance being deployed is not effective against the blackleg pathotype(s) present. (The photo at the top shows a severity score of 2.) On that field, canola may need a three-year break or rotation to varieties proven to have distinctly different blackleg resistance genetics, to reduce the risk to yield and profit. (Two studies showing rotation benefit for blackleg management: One Two) Read more about R-gene rotation.

Fungicides may provide some yield benefit if applied in early growth stages and only when cultivar resistance is no longer functional. Read more.

Pathogen spore load, disease risk and yield loss increase substantially when canola is grown frequently on clubroot infested fields. Growing resistant varieties is an effective management tool, but crop rotation that provides at least a two-year break (canola then two years with other crops before going back to canola) must be used along with resistance, to maintain the effectiveness of the clubroot resistance gene on those fields.

Evidence from three rotation studies done in Canada (two at Normandin, Quebec, one in Alberta) suggests that two years between host crops (one in three rotation) is the minimum to manage clubroot spores in a field. Thomas Ernst, who did the Alberta study, observed an eight- to 20-fold drop in resting spore concentrations with a two-year break after growing clubroot-resistant canola. With a one-year break, Ernst found that resting spore numbers never drop enough to provide any reduction in risk.

Gary Peng, research scientist with Agriculture and Agri-Food Canada (AAFC) in Saskatoon, did one of the Quebec studies. He found that for fields with heavy clubroot infestation, a two-year break between canola crops can potentially reduce the pathogen inoculum in the soil by up to 90% relative to one-year break. The pathogen population may stabilize for some time after that 90% drop, Peng found. Peng adds that this two-year break shows a benefit even for R varieties: “This reduction of pathogen inoculum in the first two years generally increases the yield of even a clubroot-resistant cultivar relative to one-year break,” he says.

Although research shows that a two-year break can greatly reduce inoculum levels on heavily-infested fields, longer breaks between canola crops are important to help protect clubroot resistance. A 90% reduction in spores in a heavily infested field or patch still leaves a significant spore load for infection to occur and potentially break the clubroot resistance used. A longer break or grassing clubroot patches is advisable in high spore loads. Read more about clubroot management at clubroot.ca.

The late Lloyd Dosdall, entomologist with the University of Alberta, worked with AAFC on a rotation study showing that with continuous canola, root maggots caused a statistically significant increase in crop damage. Based on average canola prices, the yield losses quantified in the study were equivalent to $108-$140 per acre after only three years of continuous canola. There are no insecticides available to control root maggot in canola, but a one-year break between canola crops significantly reduced yield loss as a result of root maggots, the study found. Read more on root maggots.

Sclerotinia stem rot disease and flying insects, such as flea beetle, bertha armyworm moth, diamond back moth, cabbage seedpod weevil and lygus bugs, do increase in severity as canola frequency and overall acres increase. However, these pests can be highly mobile and only a region-wide reduction in canola and other host crops will reduce their risk significantly. Long rotations on an individual farm will have little risk management benefit for sclerotinia stem rot and flying insects.

Other than volunteer canola, relatively few weed species were associated with continuous canola cultivation, the study found. This can be attributed to the high efficacy of the herbicides used in herbicide-tolerant canola production, which provide excellent weed control on a consistent basis.

However, Willenborg emphasizes that while short canola rotations may not have led to any major changes to weed populations at this time, the risk of developing herbicide resistant weeds under continuous canola production is high and extreme caution must be used when incorporating a risky practice such as this into a cropping system.

Rotation among herbicide tolerance systems and use of pre-seed and fall herbicide timing in addition to in-crop application is needed with shorter canola rotations. Rotation with other crops provides expanded options to rotate among herbicide groups, and winter cereals or perennial legumes in the rotation provide an opportunity to use these competitive crops as part of a system of integrated weed management.

O’Donovan, an Agriculture and Agri-Food Canada (AAFC) research scientist in Lacombe, Alberta, looked at canola on canola, canola on wheat, and canola on several pulse residues. Canola responded positively to increasing rates of nitrogen (N) on all residue types including canola. However, at each N rate, yield for canola on canola was less than for canola on the other residue types. Also, the pulse residues generally resulted in higher yields than wheat residue. See the graph below for study results.

Soil microbial fauna or soil water availability could also contribute to lower yields for canola on canola stubble, but these factors have not been researched, and the risk — if there is one — is unknown.

Diversified crop rotations are known to help with insect and disease management. A two- or three-year break between canola crops will significantly reduce viable spore counts for clubroot and blackleg in particular, making rotation an import step in managing these diseases. Rotation will also improve crop yields in general. Growers striving for diversity will include cereals, pulses and oilseeds in their rotations. Some will also add perennial hay crops. Recent work indicates that perennial grasses, particularly perennial rye grass, will stimulate clubroot resting spores to germinate but they are unable to complete their lifecycle, subsequently reducing the amount of spores in the soil. This could be a great rotational option for known patches of clubroot.

AAFC has a nine-year rotation study comparing continuous Liberty Link canola, continuous Roundup Ready canola, canola in a two-year rotation with wheat and canola in a three-year rotation with peas and barley. Trials were repeated at five locations across the Prairies and “all phases” were repeated each year. For example, for the canola-barley-peas rotation, every phase of the rotation – canola, peas and barley – were grown each year to eliminate the confounding effect of different environmental conditions each year.

When all sites and years are averaged, canola yield improved five bu./ac. with a one-year break (one-in-two rotation) and another five bu./ac. with a two-year break (one-in-three rotation). While this is an average, results were quite different year to year and site to site. In Melfort, Saskatchewan, for example, there was no yield difference between rotations in 2012, but in 2016, canola yields were 17 bu./ac. higher with a one-year break and 34 bu./ac. higher with a two-year break.

When adding economic analysis to this study, net returns were similar for all rotations averaged across all sites and years.

Manitoba crop insurance data for 2010-16 show that any crop tends to yield better when grown in a rotation. Canola seeded into canola stubble, for example, yields 87% of canola on wheat stubble.

Crop rotation: Economics and agronomy
Estimates are for another rise in canola acres in 2018. This will add further short- and long-term yield and agronomy pressure on fields that are already in tight rotations. AAFC researchers in Lacombe led a nine-year rotation study that compared continuous Liberty Link canola, continuous Roundup Ready canola, canola in a two-year rotation with wheat,…
Diverse rotations and economics
Diversified crop rotations are known to help with insect and disease management. A two- or three-year break between canola crops will significantly reduce viable spore counts for clubroot and blackleg in particular, making rotation an import step in managing these diseases. Rotation will also improve crop yields in general. Growers striving for diversity will include…
Risks from a tight rotation
Canola on canola yields less, in general, than canola grown on any other stubble. Reasons for this yield drop could include one or a combination of the following factors: Disease. Blackleg, clubroot and seedling diseases become more intense with tighter rotations. The sleeper disease here could be seedling disease caused by rhizoctonia, pythium and fusarium.…
Rotations and risk management
Blackleg disease rating: 2 The Canadian canola industry’s strategic plan, which sets a production target of 26 million tonnes by 2025, is based on canola acres at or below 22 million. This is important, as crop diversity and crop rotation improve pest management in canola and all other crops. Rotation can also increase crop yields…