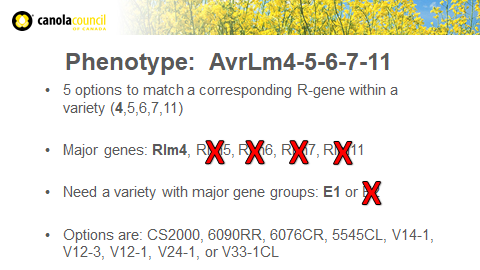 The ideal time to pull and assess plants for blackleg infection is at 60% seed colour change, which is around swath timing. Plants should still be green. Cut just below the crown of the plant into the root material to assess.

“Look for black discolouration within the hypocotyl tissue, often appearing in a wedge pattern. If a stem looks to be infected, keep a 2-3 inch piece for testing. Allow samples to air dry overnight before packaging to avoid excessive fungal growth.” From Discovery Seed Labs’ Blackleg Sampling Factsheet

Note: Old canola residue samples that contain pycnidia (the black spots) can be submitted, but these samples may show many other fungal species that are more saprophytic than L. maculans

The lab will determine which blackleg species is present: L. biglobosa or L. maculans.

L. biglobosa, a mild or weakly virulent species, is often associated with upper stem lesions and is widespread in western Canada. This species usually infects plants late in the season, rarely causing significant yield losses and is therefore considered a minor problem

L. maculans is the virulent species causing blackleg. It infects canola from the seedling stage onward, and progressively damages the plant by girdling stems and restricting moisture and nutrient uptake, leading to yield loss. Determining the species is difficult to complete visually. DNA must be taken to determine species.

Lab reports typically report both the genotype and phenotype of the blackleg races identified from the samples collected.
Genotype is the genetic content or genes/DNA present in the organism – in this case the blackleg fungus.
Phenotype is the physical expression of genes; it may or may not be influenced by environment.

Lab reports will identify the predominant race of blackleg or give a frequency breakdown of blackleg races found within the samples collected. Major genes within canola varieties need to match up to avirulence genes (Avr) within the pathogen to be effective.

Step 4: How to use the results

Phenotype results show five options to match a corresponding R-gene within a variety. The Avr genes are 4, 5, 6, 7 and 11, which means the producer can choose canola varieties with one of these major genes: Rlm4, Rlm5, Rlm6, Rlm7, Rlm11.

The producer could take a risk and continue growing group-C varieties, but if the environmental conditions are conducive to disease development, the crop is at risk for infection as the major gene being deployed (in this example Rlm 3) does not match up to the predominant blackleg race in the field and therefore is not effective.

Blackleg stubble test
A test of canola stubble can determine (1) if blackleg is present and (2) what race of blackleg it is. This can help farmers and agronomists make proper use of the blackleg resistance-gene (R-gene) classification system when making seed decisions. The Canola Encyclopedia has the full list of blackleg labs. Check with labs to see…
What’s new in blackleg management?
Following a series of consultative meetings, the canola industry – encompassing life science companies, producer associations and researchers – took a step forward in helping to manage and mitigate blackleg in Canadian canola fields. The decision was made to incorporate new blackleg resistance labels on varieties. These labels will provide greater detail on a given…
Test blackleg races in a field; make better seed decisions
Got some fields with higher levels of blackleg? If average severity is moving beyond 1.5 toward 2 or more, this is a clear sign that the blackleg resistance in the variety is no longer appropriate for this particular field. The blackleg pathogen population has shifted and R-gene rotation will be required the next time canola…
Blackleg and tight rotations
A one in four or one in three canola rotation is still the best way to manage blackleg. A one in two year rotation, no matter how one manipulates it, is higher risk. For example, available evidence does not support that a crop sequence of canola-canola-wheat-wheat is better than canola-wheat-canola-wheat. Latest research indicates that blackleg…