If, for example, soils were bare and dry in March, then got 25cm of “regular” snow in April, that snow would contribute at best about 1.25cm (1/2”) of water to the soil. (The ratio of snow depth to rainfall equivalent varies, but is about 10:1 on average. So 25cm of snow is 2.5cm of water. If more than half the snow-melt runs off, then 25cm of snow will contribute about 1.25cm of moisture to the soil.)

Snow depth is also highly variable across the landscape. Winter winds can move as much as 75% of annual snowfall away from open, exposed fallow fields in southern Saskatchewan, according to this Fang et al report. And even if snow depth was equal across a field, infiltration of meltwater into the soil tends to be higher in low areas where water pools before moving on. 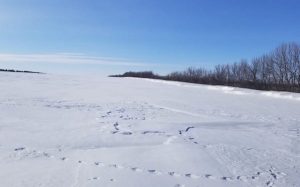 The same Fang report also made this statement:

“Pomeroy et al (1990) found that southern Saskatchewan wheat stubble fields had substantially smaller losses to blowing snow than did fallow fields. Vegetation height in these agricultural fields plays an important role. As the stubble height increases from 1cm to 40cm on agricultural fields near to Regina, the loss to blowing snow decreases by 22% of the mean seasonal snowfall.”

Another study* by A. E. Coles (University of Saskatchewan) et al looked at snow cover across the Great Plains from 1962 to 2013 and found that while snow cover on fallow (tilled) land and overall snowfall in general dropped over that time, snow cover on land with stubble stayed steady.

While this snow may not contribute a lot to required moisture for crops (canola needs 2.5cm (1”) of water for every 3.5 – 4 bu./ac. of yield), the early season soil-surface moisture it provides is often essential to good crop establishment. 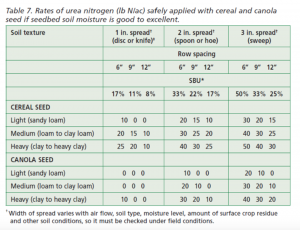 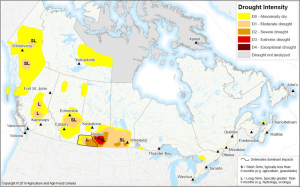 Maps: The moisture situation (with herbicide carryover theme)
We haven’t lost a crop in March, but growers across large parts of Western Canada are concerned about the soil moisture situation. This may influence decisions on seed costs, fertilizer rates and, when the time comes, seeding depth. Link to this map with AAFC commentary. Link to this map. Les Henry’s stubble soil moisture map.…
Soil Moisture Still Poor to Excess
Unseasonably cool and dry conditions prevailed across the prairies last week.  Spotty rainshowers and a few snow flurries meant additional moisture was received but these events were quite localized. As a result, soil moisture conditions continue to range from poor to excess. In Manitoba, much of the Red River Valley (approximately 96,000 acres) still remains…
Fall soil sampling and snow
With results and recommendations in hand before the ground freezes, growers can use the winter months to plan their fertilizer programs for next year, to order fertilizer and to take advantage of reduced pricing opportunities that may occur. For results as close as possible to the situation next spring, the ideal time to take fall…
Soil Moisture Poor to Excess
The latest crop report from Saskatchewan Agriculture, Food & Rural Revitalization is available at: http://www.agriculture.gov.sk.ca/crprpt090430 The first crop report for 2009 from Alberta Agriculture & Food will be available May 12. Maps of current moisture conditions in western Canada from PFRA are available at: http://www.agr.gc.ca/pfra/drought/prpay09_e.htm http://www.agr.gc.ca/pfra/drought/prpgs09_e.htm Additional moisture information for Alberta is available from Alberta…