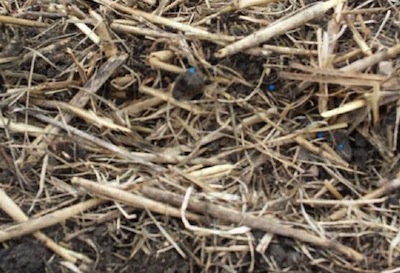 Consistent success for canola crop establishment tends to come when seed is placed 1/2” to 1” deep into warm, moist soil and packed lightly for rapid and uniform emergence. Broadcast seeding is often considered a last resort, only to be used when proper placement with a drill is not possible.

In late springs with wet conditions, broadcast seeding may be the only way to get the job done. In some years, broadcasting may actually provide better seed placement than “mudding in” seed with a drill. Broadcast seeding now could also have higher yield potential than waiting two weeks for the ground to support the drill. Another option would be to broadcast the fertilizer and follow immediate with the drill to seed only. This could provide improve seed placement, and work in the fertilizer while limiting the weight of the tank and the draw on the tractor.

Be patient. Seeding any time before the end of May should give canola a good chance to achieve its full yield potential. Before rushing to broadcast, there may be an opportunity for improved field conditions to allow drill seeding. By late May if broadcast seeding still appears to be the best solution for some growers faced with continued wet fields, warmer soils should allow more rapid germination and establishment of the seedlings with less risk of mortality from cool soils or frost damage, or stranding on the surface.

Increase the seeding rate. Seed germination and seedling survival for broadcast canola could be lower compared to seed drilled into a moist, packed seedbed. However, broadcast seeding does not always mean low seed survival. For example, in the Canola Council of Canada’s Ultimate Canola Challenge site in Manitoba in 2013, canola broadcast onto moist warm soil had exceptional seed survival. To be on the safe side, consider an increase of 1 lb./ac. compared to what you would seed with the drill to compensate for lower seed survival expectations.

Adjust fertility practices. The same conditions that delay seeding with the drill (soft fields) can also force an adjustment to fertilizer rates and application methods. Fertilizer considerations for broadcast-seeded fields include:

High residue increases risk. Successful broadcast seeding requires good seed to soil contact. This may not be possible in fields with lots of straw cover. With a thick layer of thatch, seed and fertilizer are not getting down to the soil surface. Spring cultivating ahead of broadcasting could create an equally inhospitable seedbed, with large clods and a crusted soil surface. Fields with thick residue that are too wet for a cultivator or harrows probably shouldn’t be broadcast seeded. Seed can germinate in residue, but it is not anchored, so can dry up and blow away in the wind.

Cultivate or harrow after seeding. Shallow cultivation or harrowing (if cultivation is impossible due to wet conditions) will help improve seed to soil contact in a field that has been broadcast seeded. Avoid creating lumps or clods during cultivation or straw piles with harrows or cultivators.

Crop insurance depends on establishment. Broadcast canola may not automatically qualify for crop insurance. Rules for unseeded acreage benefits vary by province. Growers should consult with their insurance representative to ensure they understand these rules clearly before making a final decision on trying broadcast seeding.