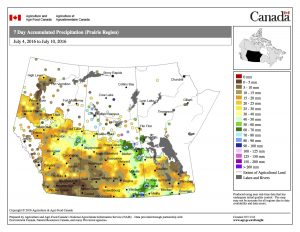 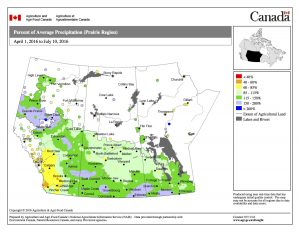 So what happens to canola plants that are underwater for a few days? Here’s a detailed explanation from Murray Hartman, oilseed specialist with Alberta Agriculture and Forestry:

1. As root oxygen levels decline, energy generation from root stored sugars switches from aerobic respiration to less efficient anaerobic processes (glycolysis and fermentation pathways). The cytoplasm of root cells becomes acidic which then causes cell death. In addition, cell damage occurs after reintroduction of oxygen to the root system because the systems that deal with oxygen radicals have been affected.

2. As root energy generation declines and root cells die, the active transport of nutrients to shoots declines (most notably the macronutrients). Oxygen-depleted wet soil causes soil microbes to switch to anaerobic metabolism, which not only promotes denitrification (and thus available N loss) but also chemical reduction of iron (i.e. Fe+3 is reduced to Fe+2), manganese and sulphate (and thus available S loss). Iron, manganese and sulphide toxicity can then occur, but this is likely of secondary importance compared to macronutrient deficiency. Calcium deficiency symptoms induced at flowering (sudden withering of the top part of the raceme) have been observed in small areas of fields under excess water in western Canada.

3. Warm flooded soil may show symptoms earlier than cold waterlogged soil since soil microbes are more active and deplete oxygen levels more quickly, and possibly produce toxic levels of Fe+2 and Mn+2 more quickly. Plants flooded under cold conditions may end up with higher damage since plant response mechanisms may be reduced. There is some evidence that plants exposed to moderately saturated soils can become somewhat acclimatized and show better tolerance to subsequent oxygen depleted soil.

4. Flooded soil abiotically emits ethylene which is a plant hormone with many different effects on plant physiology. Submerged roots also produce more ethylene precursors (ACC) that are transported via xylem to above ground parts. There is a concert of hormonal changes involving other hormones than ethylene. After flooding and one photoperiod (~12 hours), synthesis of ethylene precursors are accelerated and the ACC oxidase / receptor sites in above ground parts are also up-regulated. Under waterlogged situations, ethylene promotes stem elongation (premature bolting) which may be a survival mechanism to allow some seed production, or to increase plant height above water and thus increase flow of oxygen down to roots. However, canola does not seem to have specialized channels of cells (aerenchyma) that can conduct oxygen more readily. Research has shown that external ethylene application strongly mimics the symptoms of waterlogging.

5. Mature plants have been described as more tolerant of waterlogging than seedlings. Canadian studies with cereals and flax have found that young seedlings (2 days old) were more sensitive than older seedlings. Chinese research indicates the seedling stage is most susceptible, followed by stem elongation and pod formation, whereas the least vulnerable was the flowering stage. However, one European study reported greater biomass reductions with waterlogged 11 day old B. napus seedlings than 5 day old. Keep in mind that uptake of most nutrients has reached 2/3 to 3/4 of total by flowering, and even higher by early podding. Waterlogging at flowering and podding will not halt nutrient remobilization into developing seeds. The hormonal response of plants to waterlogging probably increases the remobilization rate of certain nutrients from leaves to fill at least the earliest developing seeds. Yield effect: The limitation on late-season nutrient uptake, altered plant hormone levels and metabolism leads to significantly lower yields (more loss at flowering than podding), which is better than no seed yield, which can occur with flooding prior to bolting.

6. Data on canola yield loss due to waterlogging is sparse, and the Canola Encyclopedia describes one pot report from Argentina. There was a yield loss reported with the shortest waterlogging period of 3 days, so there may be yield loss with even shorter periods of waterlogging. But the seedling stage (4 leaf) was conducted in their winter period with temperatures of 6 – 7°C. Canadian studies on 2 leaf cereal crops found that 1, 3 and 7 day flooding caused 0%, up to 9% and 40-60% yield losses, respectively. Another Canadian greenhouse trial found yield reductions from 7 day flooding at the 2 leaf stage of flax, oats, barley and spring wheat to be 24, 39, 57 and 42% respectively.

8. Chinese research has reported some alleviation of waterlogging stress in canola by application of fertilizer (mainly N, but also P and K) and/or growth regulators. Treatments have not been tested in Canada, but given our short season, positive economic response to any water-stress rescue treatment is not expected.

Here is Murray Hartman’s full article, which includes abstracts for the scientific studies behind these observations: Waterlogging effects on canola