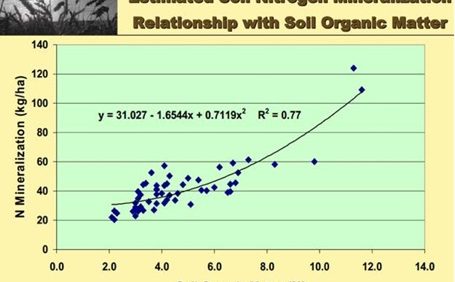 Fertilizer optimizes crop yields, maximizes farm profits and replaces the nutrients removed from soil by crop production. Increased soil fertility means increased crop root and above-ground growth, which cycles back into higher soil organic matter (OM) over time. Nitrogen is always cycling, being taken up, broken down and tied up. Small amounts can be leached or gassed off.

Improved planning, products, application and record keeping in your fertility program can maximize every pound of nutrient you apply and successfully minimize losses.

Soil tests measure the amount of plant available nitrate (NO3-) in the soil and are helpful for effective and efficient fertilizer planning. In addition to soil test nitrate, soils release (by mineralization) additional nitrate from OM. Soil bacteria is estimated to mineralize about 6 to 30 pounds of N per percent of OM every year, depending on moisture and temperature. Dryland southern Alberta fields would likely be closer to 10 pounds per percent while moist Manitoba, Central Alberta soils or irrigated fields would probably release closer to 20 pounds per percent OM.

Know your fields and your yield expectations. Soils where N rates have not kept pace with N removal — soils that have been “mined” — will need to be built back up to increase their productivity. Here is a review of N product options and how they become plant-available:

This granular fertilizer is the most common way to add N. It can be banded or broadcast before, during or after seeding. Urea’s conversion to plant available nitrate takes several weeks and relies heavily on moisture. If you broadcast urea in-season you will need about ¼ – ½ inch of rain or irrigation to wash it into the soil profile and start conversion to plant available N (NO3-).

The conversion to plant available form: CO(NH2)2 interacts with H20 over several weeks to turn into NH3 then NH4 and finally NO3- for plant uptake.

This gas is the cheapest way to buy N per pound but it can be tough to source and manage. If soils are warm and moist, anhydrous ammonia can convert to plant available nitrate in about an hour, but it is also pretty stable in cool soils. That makes it a popular option for fall banding.

The conversion to plant-available form: NH3 interacts with soil moisture fairly rapidly to turn into NH4+ then NO3- for plant uptake.

UAN is a liquid mixture of dissolved urea and ammonium nitrate. Only about ¼ of the N in UAN is immediately available, while the rest may take up to 3 weeks to convert to plant-available NO3. For in-crop applications, go early and target plant roots by dribble banding or fertigating UAN on the soil surface.

The conversion to plant-available form: 25% of UAN is immediately available as N03-. 25% is NH4+ which reacts with water to become plant available NO3-. The other 50% of UAN is CO(NH2)2 (urea) which interacts with water over several weeks to turn into NH3 then NH4 and finally NO3- for plant uptake.

What does a 5” rain do to soil nutrient availability?
After a heavy rain, canola in higher ground might be in good shape. Canola on the edge of standing water may be experiencing some stress due to reduced root function, and the nutrient deficiency that results. Lowland canola submerged in standing water for a few days will probably die. While assessing the recovery situation, some…
The right nitrogen system for you
Each farm will base its nitrogen application practices on time, labour, equipment and cost. Often losses in efficiency in one area can be compensated for by improvements in another. The “best” nitrogen (N) system is not universal, but will depend on the major limiting factors on each individual farm. Here are key points to consider…
Tips for a nitrogen top up
Growers who reduced nitrogen rates at seeding and now would like to top up can see good results from dribble banding liquid nitrogen on the soil surface. Cindy Grant, research scientist with Agriculture and Agri-Food Canada in Brandon, provides these tips: —Urea is less prone to losses when dribble banded in the liquid UAN form…
Safe rates of seed-placed nitrogen
Putting down seed and all fertilizer in one pass is common practice on the Prairies. An effective method is to place some phosphate either with the seed or in a sideband in close proximity to the seed row, while placing the balance of the phosphate and the more mobile nitrogen and sulphur in a band…