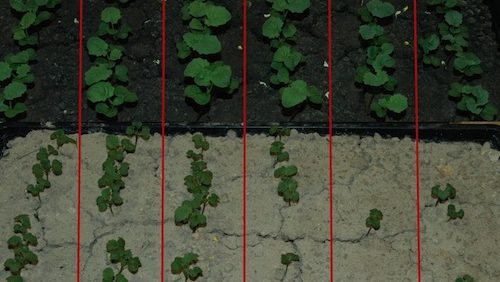 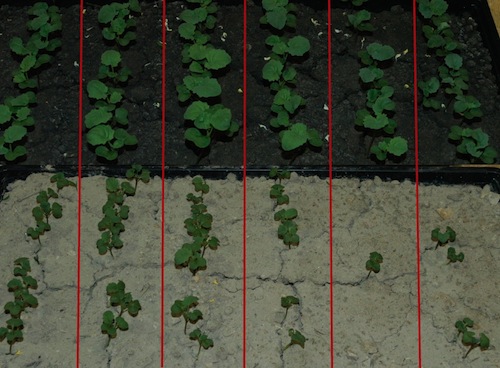 Answer: Seed-placed fertilizer. The treatments compare seed-placed mono-ammonium phosphate (MAP) and seed-placed ammonium sulphate (AS) at low and high rates. The control (row 1 from the left) has no seed placed fertilizer. Row 2 has a low rate of MAP. Row 3 has a high rate of MAP. Row 4 has a low rate of AS. Row 5 has a high rate of AS. Row 6 (farthest to the right) has a blend of the two fertilizers. The research shows that at rates typically applied, AS is often more toxic than MAP. Not only does AS have a higher salt index, but ammonia is released in calcareous soils which can reduce plant populations below the optimum range. Seedrow application of AS to soils with a high CaCO₃ content, such as eroded hilltops, increases the risk of ammonia toxicity and can severely reduce plant stands. These conclusions are from research by University of Manitoba grad student Laryssa Grenkow, who presented at CanoLAB 2013 in Brandon.

Fall fertilizer timing: Wait for cool soils
The key strategy of fall fertilization is to store nitrogen over the winter in the ammonium form – which is held on clay and organic matter – and is referred to as stabilized N.  Urea and anhydrous ammonia are both considered ammonium based fertilizers. When the ammonium form N is converted to nitrate by soil microbes,…
Why limit seed-placed fertilizer?
The safe recommendation for seed-placed fertilizer for canola is this: Apply no more than 20 lb./ac. of phosphate in the seed row. Place all other fertilizer, including extra required phosphate, in a side band or mid-row band where it will not harm germinating seeds. Why limit seed-placed fertilizer? Generally, small-seeded crops such as canola are…
Can’t apply enough fertilizer with herbicide mix
With warm soils, good stand establishment and generally good moisture in many canola growing areas in Western Canada, growers may wonder if they’ve applied enough fertilizer to meet the yield potential of the crop. Nitrogen and sulphur are effectively applied as a top-dress. The best method is to dribble on fertilizer in a concentrated band…
Canola Watch quiz – Fertilizer
Three questions on crop nutrition and fertilizer to test your knowledge.