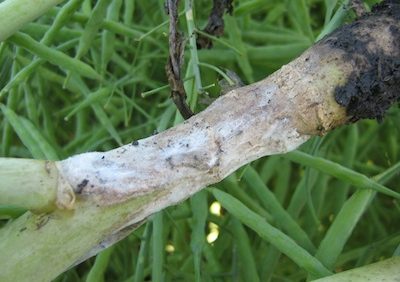 Sclerotinia is no longer a regional issue. It doesn’t matter where you farm, your canola can get a costly sclerotinia infection if conditions are moist before, during and after flowering. Geography is not immunity.

Management for 2013: Canola growers all across the Prairies, including in non-traditional canola growing areas, should have a plan in place for sclerotinia prevention every year. Put it in the budget. Canola is grown everywhere now, and most of our other broadleaf crops are a host for the same sclerotinia species that infects canola. And management practices that promote high yields will tend to produce dense crop canopies that create a perfect microclimate for disease. You can always abandon the plan to apply a fungicide if conditions are clearly not conducive to sclerotinia (e.g. dry with low yield potential), but having a plan will mean if conditions are conducive you can act in a timely manner to get the best return on that investment.

Spraying at 20-50% flowering is the best timing to prevent sclerotinia infection. Initial flowers are critical to protect because they will provide more time for infection to spread. They are also more likely to drop onto the main stem, while later flowers on side branches or at the top of the plant are more likely to remain higher in the canopy and produce branch infections with reduced yield impact.

Crops with a higher plant density also usually have more even maturity and a shorter flowering period, making it easier to choose the correct spray timing for sclerotinia. Uneven crops and crops with low plant counts may be good candidates for a split spray, two applications.

Yield loss is impossible to estimate, but it was significant in some pockets. Aster yellows losses may also have been higher than estimated in some cases because yield loss can occur even when typical obvious symptoms aren’t produced.

Management for 2013: Aster yellows were big in 2007, then dropped off completely in 2008. This made it hard to develop any action plans that might have worked to prevent infection. We can’t predict what will happen in 2013. We have heard anecdotes about different results in different fields, and the temptation is to credit this difference to insecticide sprays or variety difference. But we may get the opposite result next year. Further investigation and research will be needed to confirm if some of these anecdotal differences could provide reliable control options. One caution: Applying broad spectrum insecticides to get leafhoppers in the spring is not likely to work.

Three new Alberta counties reported cases of clubroot in 2012, and now all counties along Highway 16 to the Saskatchewan border have clubroot.

Management for 2013: As clubroot continues to move, growers in Saskatchewan and Manitoba can no longer view this as an Alberta-only disease. Review the clubroot prevention strategies to develop a plan for your farm, and consider a clubroot resistant variety for 2013 if you think your canola is at risk. 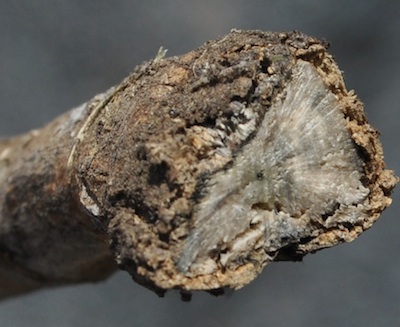 High levels of blackleg have been found in some canola fields this year. These levels suggest the inoculum had been building in these fields over a number of years. Early season moisture initiates the infection and heat or stress later in the season  contributes to canker development. Growers with tight rotations and who chose varieties with the same source of resistance may have seen higher levels of blackleg.

Management for 2013. Adding one extra year between canola crops might be worth doing if you can prevent major yield loss to the disease. Definitely grow a resistant “R” variety if you didn’t before. If an “R” rated variety had moderate or high levels of blackleg, this is an indication that the variety’s blackleg resistance genes are losing their effectiveness against the blackleg races in the field. Switching to another “R” rated variety may help. Consider fungicide. Early season infection is what leads to yield-reducing cankers. Fungicides are registered to manage this early season infection. Fungicide to manage blackleg is not common practice but may be necessary in some fields. This fall, scout canola fields and clip stems for signs of blackleg in this years crop.

What is “intermediate” disease resistance?
A new canola variety was recently registered claiming an “intermediate” reaction to clubroot pathotype 5x, as well as resistance to established clubroot pathotypes 2, 3, 5, 6 and 8. Based on Western Canada Canola/Rapeseed Recommending Committee protocol for clubroot disease resistance, seed that is resistant (R) shows less than 30% infection based on a severity-by-incidence…
Disease Update
Relatively low levels of sclerotinia infection can be found in most areas except in heavy and late maturing crops in northwest Saskatchewan where disease pressure is high due to frequent rains through the flowering period. Higher amounts of alternaria are occurring in B. juncea and B. rapa in western Saskatchewan and in B. napus fields…
Disease scouting: Video aides
Clubroot, blackleg and sclerotinia stem rot are found in many canola fields at this stage of the season. Taking time now to determine what diseases are present and at what levels can help with variety decisions and crop rotation planning for next year. While at random locations in the field checking for crop staging and…
Lots of aster yellows
Fields all across the Prairies are reporting aster yellows. The phytoplasma infection causes misshapen pods and flower buds. Infection looks awful and stands out, but rarely causes economical loss. Most fields don’t go above 1% infection rates. However, some fields are reported this year with rates at 5% to 8% of plants infected. This…