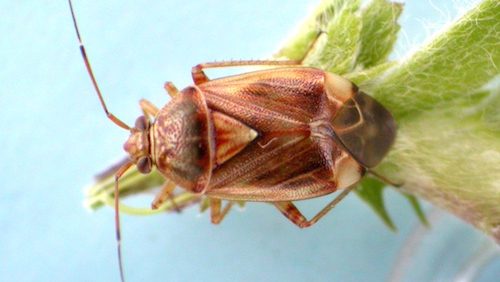 Our current economic threshold tables for lygus in canola may be too low when applied to current canola production systems across the Prairies. The original economic threshold research was based on field studies between 1989-1993 in southern Manitoba using Westar variety and plant stands of 7-14 per square foot. The thresholds were validated in 1999-2001 with Q2 variety in Lethbridge, Beaverlodge and Dawson Creek.  But that was 10+ years ago. New hybrid canola varieties grow, develop, and yield differently than Westar and Q2.

For example, if the stand is healthy and growing fast, growers are reportedly doubling or tripling thresholds. Say the threshold is 10 per 10 sweeps, some growers are doubling that to 20 per 10 sweeps as the action threshold. (See the tables at the bottom.) There is no data to support this, but future research needs to reexamine the thresholds with respect to our newer varieties of canola. Interestingly, a small amount of lygus feeding may actually encourage the plant to produce more buds. Alberta studies found that Q2 canola plants caged with Lygus adults at bud stage produced slightly higher yields than pest-free treatments grown in the same plots. These plots received good soil moisture and average temperatures through the growing season.

Even if doubling or tripling of thresholds, the scouting process depends on accurate identification of the insects netted and on proper sweep net technique.

Sweep net instructions
—Lygus sweep net monitoring should start at the late rosette stage and continue through the growing season.
—Sample several locations in the field. More sweeps will provide a better assessment of pest populations.
—Sweep-net monitoring should be done under fair weather conditions (e.g., sunny, low wind, above 15 C and between 10 a.m. and 6 p.m.) to ensure Lygus are active within the canopy.  Sweep using a 180° arc into the canopy and aim to sweep the buds, flowers and pods while moving forward.
—Properly identify Lygus adults from similar Alfalfa plant bug adults. (See the photos above.)
—There are five instar or juvenile stages of Lygus nymphs. All are bright green and very mobile.  Third to fifth instar nymphs will develop black spots on their backs.
—Identify and count third to fifth instar Lygus nymphs when sweep-net sampling at late flower and early pod stages of canola development. Nymphs plus adults should be counted and compared to the threshold tables at late flower stages because: (1) Third, fourth and fifth instar nymphs experiencing warm growing conditions can develop through an instar stage every 1-2 days. (2) Both nymphs and adults feed on canola. (3) When sweep-net sampling at mid-flowering, third, fourth and fifth instar Lygus nymphs will contribute to adult Lygus populations at the vulnerable early pod stages.

Look for beneficials.  Laboratory studies show that lacewing larva consumed seven Lygus nymphs every 24 hours. (See the photo above.) Damselbugs and crab spiders also consumed large numbers of lygus nymphs. Lady bugs (a.k.a. ladybird beetles) consumed low numbers of third, fourth and fifth instar Lygus nymphs. This suggests to us that these general predators (1) all play a role in suppressing Lygus in canola within the canopy, and (2) may have “feeding niches,” with each predator preferring specific nymphal instar stages as prey.  These general predators exert a level of control that broad-spectrum, contact insecticides cannot.

Canola growers can conserve and protect these natural enemies by only spraying when monitoring reveals insect numbers that exceed economic thresholds, indicating that an insecticide is required to manage outbreak situations. It may be convenient to mix an insecticide with a fungicide application, but if unnecessary these sprays may contribute to insect resistance and loss of beneficial insect populations.

A few lygus in a field can improve canola yield, as mentioned above, and they also retain populations of these general predators. 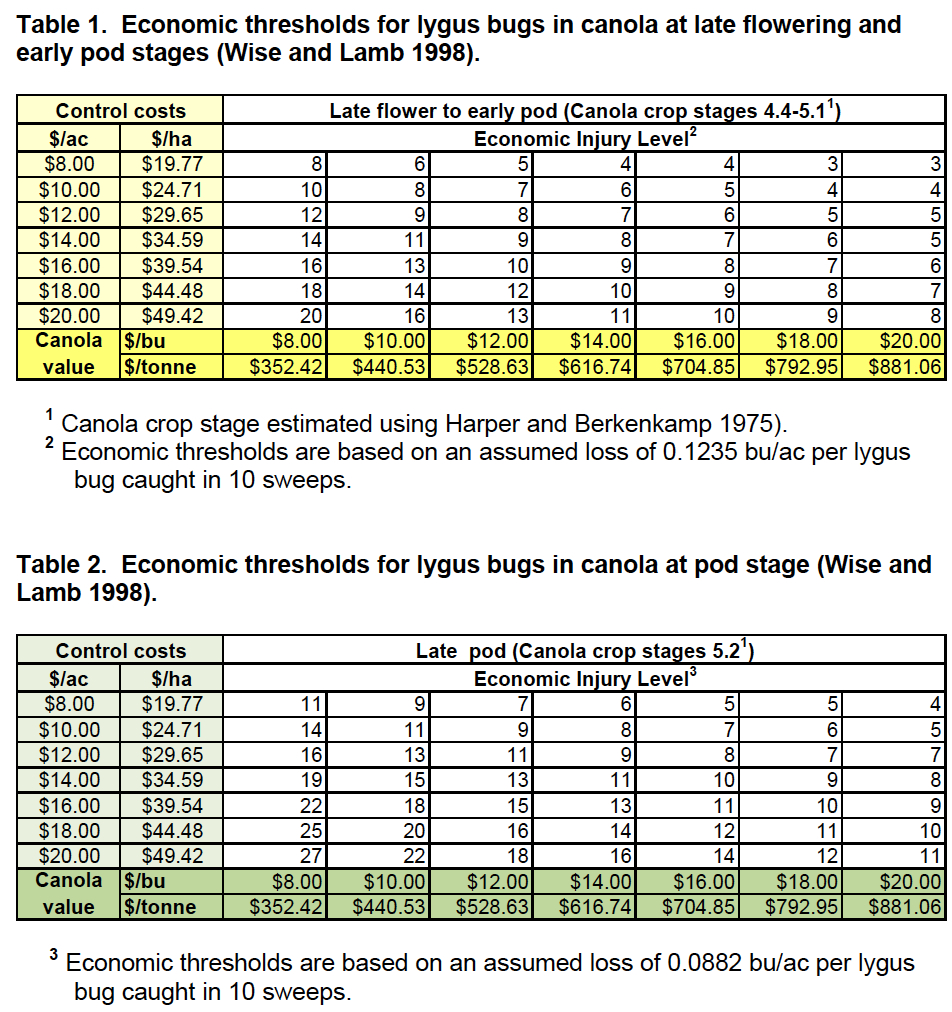 Station 3: Lygus and its natural enemies
Station hosts: Jennifer Otani, Agriculture and Agri-Food Canada Troy Prosofsky, CCC Our current economic threshold tables for lygus in canola may be too low when applied to current canola production systems across the Prairies. The original economic threshold research was based on field studies between 1989-1993 in southern Manitoba using Westar variety and plant stands…
Lygus bugs: Thresholds and scouting tips
Please read the Canola Watch Fundamentals article on lygus for the latest on scouting, thresholds and timing.
Lygus – race between insect and crop development
Quite high populations of lygus are being found in parts of the Peace and southern and central Alberta (finding as many as 80 lygus per 10 sweeps with approximately 25 to 30% of those being adults with the remainder a range of instar stages). Sweep net results also seem to be variable. For instance, if…
Lygus thresholds: Good vs dry conditions
In very dry conditions, lygus threshold tables based on Wise and Lamb’s research from the 1990s are still appropriate when making spray decisions. These tables indicate that if canola at the pod ripening stage is $12 per bushel and spray costs $12 per acre, the threshold is 11 lygus adults or late instar nymphs per…